Our Juniors have been working hard in their training, and their fitness was put to the test at the Sika Duathlon on the 23rd November. Unfortunately, the weather was horrible, however, it didnt seem to stop them turning up! I could write a very long blog about how brilliantly all our juniors performed, however, I would be here a while, so I am just going to mention a few that really stood out. Fin, in the Tristar for his guts and determination for a second time, as this time his helmet was broken, and despite a very long time in transition trying to replace the helmet, he still ripped up the course to secure a 4th place. Ellie and Annie in the TS2 catagory really illustrated how they have developed over the last year. They came 1st and 2nd and looked very strong. Then in the TS2/3 Boys race, there was some great racing. Jack, Callum, Will all demonstrating how their fitness and ability has gone up a gear, and there was a real battle between those boys on the course with some high quality visiting athletes. In the girls, Lola and Lily battled it out, with Rachel, finishing first and second. A mention has to go to Rachel who trains with the South West Academy. She was flying until she got a puncture. She ran the second lap of the bike, and I gave her my mountain bike, and she finished the course. That just shows guts and determination and is fantastic to see. 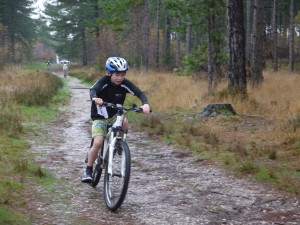 The next up were the adults, and we had Sam racing as a youth athlete and Goalspecific Clodie. Sam started as he meant to go on, and posted the fastest run splits of the day. He then disappeared into the forest on my mountain bike (it was getting a fair bit of use!) with SPD clips…in his trainers! However, that didn’t stop him, and he finished the whole race in 5th place! Clodie, dusted off her mountain bike for the first time in a while, and had a solid race despite a nasty fall on the bike course (who put that tree root there!!) A mention also has to go to Simon, Derek, Sharon and Andy flying the tripurbeck banner as well. It was great to see Sharon and Derek’s daughter, pro athlete Louise, not long returned from Xterra in Hawaii, racing with us. She put in a storming race, winning the ladies race, with previous winner Liz in second. The ladies field was not huge, but was of a very high quality, as was the mens event.

All results can be found at http://www.tripurbeck.com/news/headlines/sika-duathlon-results/

A mention also has to go to Serena, who couldn’t race with us, as she was competing in the wessex League Cross country competitions. She put in an amasing effort, and won the under 17 competition (at the age of 15!)

Well done to all our juniors and adults alike! Keep it coming