Racing has most definitely been underway in the last few weeks, and the team have put together outstanding achievements. There has been A LOT of racing, so we will start back in June with 3 of the team heading out to Montreal for the Sprint World Triathlon Championships!

Becky G, nursing a torn ligament in the ankle (as a result of falling off a curb in Allemont on the way to the restaurant ???? ), Laura and Katie R headed out to Canada for the championships, and fortunately arrived with their bikes ready to race on the Saturday as many evidently didn’t! Despite a few days of uncertainty as to whether the lake would be clean enough to swim in, come Saturday it was confirmed as  a triathlon and the sun was shining. This was the first championship event for Laura and Katie, and the event did not disappoint. Katie loved every minute of it and put in a great race in her Age Group, smiles all the way and achieving her goals for the event. (Although returning with Covid I might add was not on the list) Laura stormed her Age Group, and despite her limited experience at racing these events finished 4th overall, an absolutely brilliant achievement with a strong performance in all 3 disciplines. It was all a bit of an unknown as to how Becky’s ankle would hold up after a couple of weeks of rest and limited running, but once she has her competitive head on, there is literally nothing stopping her. She lead from the start and rode away from the field on the bike to take the gold medal in her Age group. 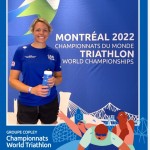 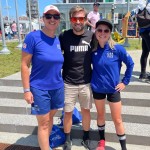 Also racing that weekend was Will Oldham, taking on his first Middle distance event at Cardiff. A great opportunity to practice fuelling and pacing for prep for the big IM at the end of the season, and despite a few hiccups on the fuelling side, Will put together an outstanding race finishing 4th overall, and 3rd in his AG in a time of 4.48. Also racing for the first time this year was Emma up in Scotland in a sprint Duathlon. First time testing out her TT bars, and despite being in a field surrounded with TT bikes, still held her own, finishing 6th overall. And finally, still on the same weekend, Mark took on the Endure, which involved him and a teammate running a 5-mile loop continuosly for 24 hours. Sounds horrendous, however, they both managed to complete 60miles each over the time period! Pretty impressive running! 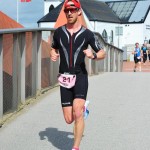 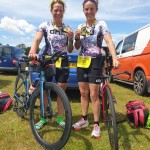 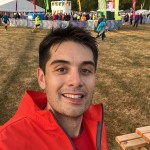 Onto last weekend, we had Samuel taking on his first middle distance with Liam. Jon and me joining him, and Mike competing in the Sprint, at Swanage Festival of Triathlon. Bit of a last-minute entry for me and Liam, but it was on my doorstep, and Liam was up for a race, so taking on the hills and coastal paths of Dorset seemed a good choice! Salam was also racing at Holkham half and Pete, Adam and Elissa were taking on the brutal Ironman Bolton, so Ade was kept busy tracking athletes all day! The Swanage crew finished first in the day, with Samuel winning his AG, Liam coming 4th, Jon 2nd despite a nasty fall running off the coastal path, and I took the overall female win, with another great step forward with running, a year post hip replacement! In the sprint, Mike won his Age group and came 5th overall, despite a slight detour on the course.

Salam put in an impressive performance in Holkham finishing 5th in her Age group, nailed the process of the race, regaining some more confidence back on that bike and finished strong, there is so much more to come here. Meanwhile the IM athletes were battling the hills of Bolton. Sadly, Elissa was pulled at 8 hours on the bike, unsurprisingly as she was nursing a pull in her back and was full of cold. She will be back though! Adam and Pete endured it all to the bitter end and put in solid performances in their first IM events. A huge achievement on probably the toughest course in the Ironman race calendar. Maybe next time, pick a slightly flatter one????? 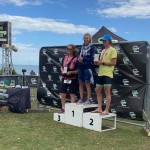 Still on the same weekend Becky, after flying back from Canada, hopped back on another flight to Roth a few days later, to take on her first ever IM distance race at Challenge Roth. This again was all about the process. First race at that distance, and with a fair bit of uncertainty over whether the ankle would hold out, so we had a clear strategy in place depending on how the day went. Well let’s just say it went incredibly well! Not only did she finish top of her AG again, but she was right up there with the pros, finishing in sub 10 hours! Worth it as she now has a year’s supply of Red bull and a portable fridge to go with it!

Finally, this weekend! Lots going on! First up we had Jen taking on the brutally hard Half X, the only flat part of it was the swim! Despite being relatively new to this distance she flew around the course, finishing 1st female overall, getting to take home a massive lump of rock as her trophy! (seems to be becoming a theme!). 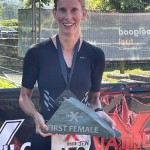 Izzy and Sean took on the middle distance Triathlon England National Age Group Championships at Ironbourne Events, and I joined them for a bit of fun post Swanage in the Aquabike.  Needless to say both Izzy and Sean stormed the race right from the start finishing 5th overall for Sean and 2nd for Izzy, both winning their AG and becoming the National Champions in their respective groups. I picked up a 2nd overall in the Aquabike, so a successful day all round! 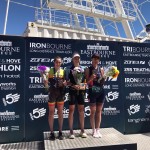 Racing is continuing to come thick and fast now, and there are a few more events lined up for July. Becky, and Eric are taking on the long distance and Emma the duathlon at Alpe D’Huez. Richard is racing the Long distance Outlaw but first up is Liam at the ROC, Katie in the Castle to Coast and Linda is racing in the national aquathlon champs. Plenty more lined up for August as well