Congratulations to Leanne, who completed her second only ever Middle distance, first test out on her New TT bike as well,  last weekend! Leanne is continuing to go from strength to strength, and I am looking forward to working with her over the winter, as I know she will be racing super fast next season due to her consistency and dedication to her training! It is all very exciting. Leanne’s race report is below. 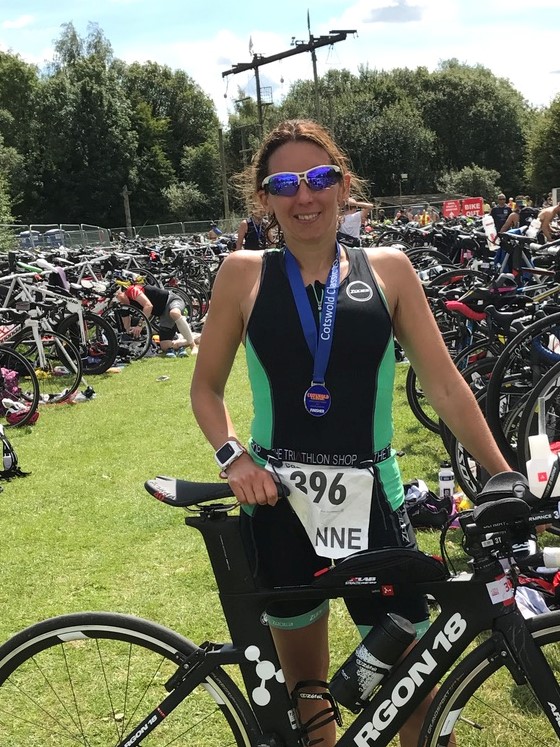 With only 4 weeks since my first ever Middle Distance Triathlon; I was feeling strangely calm in the build-up to the Cotswold Classic.  Anyone that knows me knows I am normally a nervous wreck (usually about the swim!). This was by far one of the biggest races for me in terms of numbers; but also, a mixed wave with over 100 people starting at the same time – this was a scary thought… plus the debut of my new triathlon specific bike (a very different ride to my road bike).

Registration was on the day before the event, so I off I went to pick up my number and check out the course and transition.  When I arrived – the sun was shining and everyone seemed in good spirits.  The organisation was fantastic – I soon had my race pack and was on my way home to finish getting everything prepped.

I had my usual pre-race meal – spaghetti bolognese!  This a tradition from when I ran as a youngster; and one that just seems to work; something I am now too scared to change.  Given the early start ahead; I was in bed by 9pm!

After not much sleep; the alarm went off at 3.45 (normally when it goes off at this time we are going on holiday – not this time!).  Trying to pack up the car, make breakfast and coffee (couldn’t function at this time without caffeine); without waking up the entire household was a difficult task; but I was on my way by 4am.

The drive seemed to take forever; but I listened to some good music on route and finally arrived.  It was still dark and there were people and bikes everywhere.  It suddenly felt real.  I unpacked the car and made the short walk to transition where I got everything set up.  Now the nerves kicked in.  It was a chilly morning; so, I decided to go for a wander to try and warm up.  The Lake had steam coming off it – brrrrrrr; it was going to feel cold.  After a walk around – I made my way back to transition to get my wetsuit; goggles and hat – the first wave was soon to start.  I was in wave 6; but transition had to be clear.

I got down to the water’s edge and watched as the waves started to go in 10 minute intervals.  I was lucky to bump into someone I had met on a Triathlon Coaching course – which was a great distraction and good support.

Before I knew it – my turn was up.  For me the swim is the hardest part – I often question why I don’t just do duathlons and not swim all together; but then that is part of the challenge.  After a series of stressful swims – this is playing on my mind as I enter the water.  My first thought is that it isn’t as cold as expected – good news!  I then look round and realise the amount of people in the water with me and I suddenly got a shiver – actually it is freezing.  I position myself at the back; and the whistle blows.  I start with a few strokes of breaststroke and then go for it – remembering all the work I have put in and all the practice at the Lake.  For the first time in a race I am actually doing front crawl and I am not panicking.  This was a huge confidence boost and I even managed to continue swimming as part of a group.  The more I crawled – the more confident I felt – this is new territory for me.  I was actually almost enjoying the swim.  Before I knew it, the end was in sight.  As I was helped out the water; I looked at my watch – 37 minutes!  That is 7 minutes quicker than 4 weeks ago – I will take that!

I enter transition and quickly get sorted and onto the bike.  My legs felt quite heavy and my feet were freezing; I was finding the start of the bike leg tough.  The course was flat and busy; so I tried to focus on overtaking people ahead and keeping the pace consistent.  The first lap (45k); seemed to take forever and I was finding it hard.  After all I have only been training on my new bike for 4 weeks, and I was find the TT position challenging.  I hadn’t experienced this before in training; but I figured as long I was still speeding along – just try and ignore the fatigue in the legs and back.  There was one hill that appeared twice.  Now this was nothing compared the hills that I am used too; but it felt like Everest.  This was mentally hard to deal with.. To try and compartmentalise the uncomfortable feeling -  I started doing the maths and realised that I was at least 10 minutes ahead of my target for the bike; which gave me a bit of a boost.  Before I knew it, I was making good progress on the second bike lap and started to relax and enjoy it a bit more (even with cold feet and tired legs).  The last 10k of the bike lap was all flat heading back to transition – I overtook a lot of people here and finally the run was in sight.

As I entered I transition; I quickly racked my bike and was on my way.  My feet finally started to warm up; but as they did they hurt and I had pins and needles.  I needed something to else to focus on; so, I started following a fellow runner and keeping up with them.  After about 10 minutes I was feeling really good and was going at a pretty quick pace.  The run was a lovely course with a great amount of support from the crowd and also the marshals – this distracted me and kept me going.  The first two loops I felt really strong and actually enjoyed it – and then all of a sudden, I started to hurt – my knees, my back – I was tired.  I took some energy drink from the aid station, but that didn’t seem to do much and the last lap seemed to take forever.  I was trying not to look at my watch as every time I did it didn’t seem to change…. As I approached the last 2km I realised what my finish time was looking like – wow…  I was almost 30 minutes quicker than 4 weeks ago.  This definitely gave me a kick and I started to overtake some runners again and with only 1km to go the support from the crowd was fantastic.  I was almost there.

Coming through the funnel at the end and realising my time of 5 hours 17 minutes was an awesome feeling.  I got my medal and some water and headed back to transition.  I looked at my phone and the messages of support from my family and Wallingford Triathlon Club (who had been tracking my progress); put an even bigger smile on my face.  Now for the drive home and post-race recovery – a BBQ with my family – the best way to end the day.

Since working with my coach Fran from Goal Specific the improvements I have seen have been amazing.  I am racing again in another 4 weeks – gathering more and more experience on the way and working towards my goals for next season.