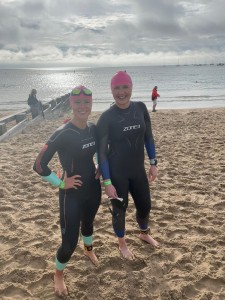 The Goalspecific Team have been up to it again this weekend, starting with the Bournemouth Pier to Pier swim on Saturday. In true UK style it was windy and wet, so there was a fair bit of chop to contend with, though not quite on the level of the Bustinskin’s swim last week. I have to say I still haven’t quite got to grips as to why the swim was shortened, changed, as the ‘pier to pier’ became the ’round and round in circles’ -  but it certainly led to a bit of athlete confusion. That said, Shelley ( of course non wetsuit….brrrrr) Louise, Becky, Salam, Marta, and Sophie all had a go at guessing the swim course and (except for Sophie, who decided to swim an extra 500m, after coming back to shore as a result of drinking half the sea and then deciding to do it all again! – Kudos for that!) swum similar distances. All good experience gained for OW water swimming, and well done to those raising money as well for different charities. Claire added to her growing list of achievements with a strong performance at the banana triathlon – second standard distance race and 20mins faster than the first! 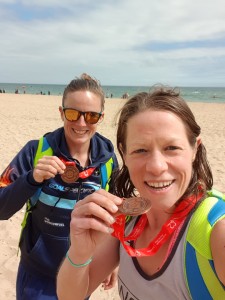 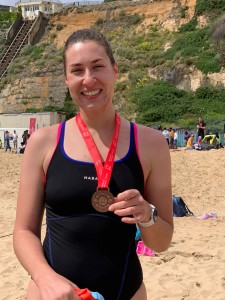 On Sunday, we were back to triathlon racing with Mike, Rich, Jess, Marta and Izzy racing in the Swanage Triathlon, and Becky and Alex racing Elite at Holkham Outlaw Middle, with Sarah and Nick as support crew providing me with a live update! Nerve racking!! Also Joe was racing at Windemere in his first ever standard distance race, I cant think of a better way to challenge yourself as an 18th birthday treat! Joe posted his best swim to date, before setting to work on the bike, which was going very well until a marshal sent him the wrong way! 12km later he re-joined the bike course, rather angry and with a bit more fatigue in his legs than he should have done, but he still paced the run well, considering it’s his first 10k of the bike! Great experience gained, and getting stronger every race!

Joe was not the only athlete taking up a new challenge either, it was both Rich and Jess’s first ever triathlon. So they decided on one of the hilliest around, and no easing into it for Jess either, straight to the standard distance. To add to that, Jess actually only started riding a bike 4 months ago as well….hadn’t swum in, well years (of course Covid didn’t help here either!) so this was quite a challenge. I also believe it was only Rich’s second outside ride! Needless to say, they both executed the race perfectly, all goals achieved and looking to raise the bar again for the next one! Also well done to Marta, that toe is obviously improving!!   Mike raced for the first time on his TT bike, and he rode brilliantly on that course posting very competitive split to add to a strong swim and run – really good race and most importantly…. no cramp this time – great news:-) 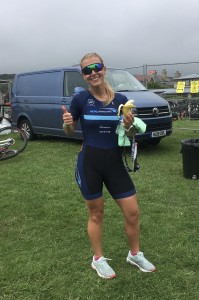 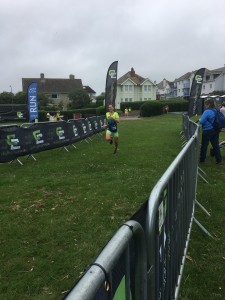 Izzy was also racing at Swanage, in the middle distance, and smashed it finishing first female and 3rd overall. However, post race she found out that she had been disqualified, due to skipping a temporary traffic light. Izzy didn’t see the light and when questioned the marshal described Izzy as fast, with a bright trisuit….but no race number mentioned ???? So frustrating, however, we cannot take away from the great performance, and now its time to focus on the Eastbourne Middle in a few weeks.

Another great performance was from Sean in the Fugitive. First race in, well years, and despite nursing an achilles / calf issue he won his Age group by 26mins finishing 8th overall! Very impressive.

Finally, Becky and Alex rubbed shoulders with the PTO athletes at Holkham, both racing in the elite wave. Becky who has only very recently recovered from damaged ribs and leg from a bike crash, put in an excellent race (in my opinion

). She finished the swim mid pack in the elite wave, biked strong, and held on to that position with a solid run. Now we know that the run legs were not as fast as they usually are, but considering the lack of running and swimming recently, a great effort finishing 12th overall and would have been a clear 10mins ahead of the winner in her AG. Now injury free, I am really looking forward to just seeing what the next few months will bring with some consistent training.  I have to mention Alex here as well, (associate team member) his first ever Middle distance race, finishing 14th overall! with a blistering bike! Wow so much to come, we are very excited about watching Alex work his way up the ranks!