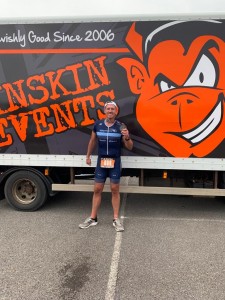 Goalspecific athletes were racing once again this weekend, we had Eric, Louise, Marta, Tripurbeck Coach Derek and Liam racing in Weymouth in the Bustinskins array of events.  Salam and Becky made a last minute decision to enter the Ladies only Cotswold Sprint, to compare with their 2019 race, and Ian tested out his new TT bike at Bowood. In true UK summer style, the weather was terrible in Dorset! The wind picked up, making the sea pretty rough and there were numerous very heavy downpours throughout the morning, just to make racing that much harder. This was Louise’s first ever Triathlon, so nothing like being eased into it, however, she battled with the waves and the rain and together with Marta, had a really positive and enjoyable (!?) day out. Honestly, if you can get through that swim, you can get through anything! Sadly the washing machine swim beasted Eric and despite only being a few 100m off completing the swim, severe sickness took over and he had to be brought to shore to visit the onsite ambulance for a good 45mins.  Though Eric being Eric, had a quick cuppa and a bite to eat, and decided to still take on the bike and 1 lap of the run. Hard core to say the least!

It was Liam’s first triathlon of the year, after a great ride on the 100 hilly back in April, and nothing was going to stand in his way. Despite the lack of race practice, he paced the swim /bike perfectly and posted a Run pb by over 20mins! I think all that winter training has paid off!

Meanwhile, Salam and Becky who dropped the race into conversation on Saturday morning,  put together a series of really sensible process goals for the Cotswolds, and I have to say, absolutely smashed it. Finishing 1st and 2nd in their AG, Salam finishing 3rd overall, smashing their previous time from Cotswold, just shows how their hard work and consistency is paying off. So much more to come as well, its all very exciting.

Finally but by no means least Ian was racing at the Bowood sprint. First time racing on his new TT bike and first race in 2 years. Really good swim and bike particularly although we may have to work on those long distance transitions

A great performance, and the first of many to come! 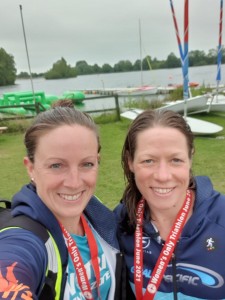 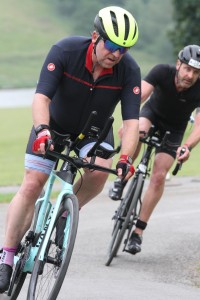 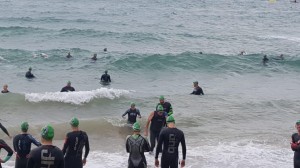