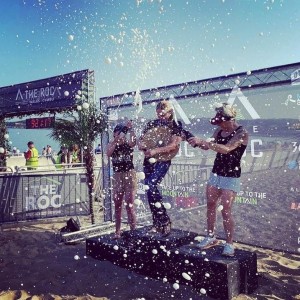 First up this weekend was Becky on Saturday, heading up to Wales for the postponed ROC race. A crazy hard event which started at Abersoch Beach with a 1.5km swim before heading off onto a 50km undulating bike into the Snowdon Massif. Then athletes have to climb the highest mountain  along the Watkin Path which is 6km in length and 3300ft of ascent, only to then head back down, get back on the bike for the 50k return journey to the beach, and of course an extra sneaky 1k beach run to the finish line!  Right up Becky’s street to be honest! Ade and I spent the morning tracking her around Wales, and she was storming throughout. Up against a couple of pros, the leading girls had some distance over the rest of the field, and kept swapping positions throughout the race. The final result was an overall 3rd podium spot for Becky, with some champagne and prize money! A great day out.

Next up on Sunday we had Jen, Katie and Joe racing at Box End, Jon racing more locally at Bustinskin and George racing at Cotswolds Sprint.  It was another storming race from Jen, despite recovering from a sickness bug all week, finishing 2nd overall and first in her age group. Katie illustrated that all that hard work on the turbo and run sets are paying off (despite a bit of a hangover from a party on Friday night!) with a solid performance, and Joe, who wins outright for a really tough leadup into the race with illness, raced despite a lack of training over the last few weeks, so focused on some specific process goals, rather than racing it,  as well as  to gain some experience (being only his 2nd ever standard distance race!). 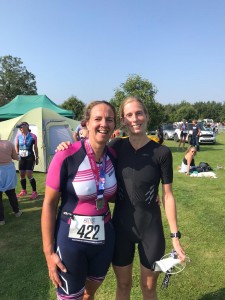 Over in Cotswolds, George raced for the first time since surgery on his shoulder. Therefore to make it a bit more challenging as coming back from surgery wasn’t quite enough, he decided to also spend a few days before the race riding 230 miles with over 6000m of climbing (he should have gone to the ROC with Becky!) Despite the fatigue in the legs, and relatively limited amount of swimming over the last few months, he finished 3rd in his AG and 7th overall, I think, results are a bit all over the place. Jon also had a fantastic race at Bustinskin’s classic, winning his Age group by a massive margin and nailing all his race goals. A nice bit of practice before Barcelona next month!

The next few weeks are busy as well with Bournemouth Sprint and Olympic as well as Outlaw Bowood next weekend, followed by Weymouth 70.3 then Valencia at the end of the month.

The season isn’t over yet!