Today was the first schools cross country event in Poole for year groups starting at yr 5/6 all the way to yr 11. Max was first to go, in his first big cross country running event. He was running against older boys, as he is only yr 5 and put in a solid performance, finishing in 40 (something – not sure what) out of a big field, and was the first yr 5 from his class home. He was really positive, and his first comment was that he wanted to come back faster next year, so that’s great. They slowly worked their way up the year groups, so Lola and Lily would have been the next to go. Lola won the event by a clear margin of 15 seconds, Lily coming in 7th. Then finally Sam and Serena to head off, and they weren’t going to disappoint, as Sam finished first in his age group, Serena 2nd!!!! What a great start to the season for all of them. Sam is no off walking for miles and miles over the weekend with D of E, and Serena is racing in a Sprint triathlon this sunday, so more news will follow! (all featured in photo, except that Fin has replaced Max! so here is max!) 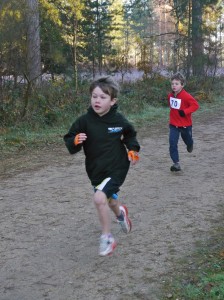