The races are coming thick and fast for the Goalspecific Team and there is plenty to catch up on from the last couple of weeks! Apologies for the lack of race team kit – I am chasing it, almost a month past the date they said we would receive it! ….sigh……

Anyway, more importantly, lets focus on some great results from the team. A couple of weeks ago, whilst I was tutoring up in Loughborough on the L3 HPCP course and catching up with Becky, who happens to be on the course, Bex, Paul and Nige were racing IM70.3 Mallorca on the Saturday and Marianne and Sarah were racing in the Immortal Middle on the Sunday. Bex ‘s new swim stroke sent her flying around the swim course in a sub 32min split, matching Paul, and if they had started at the same time, they would have run through T1 together! They both put in solid bike performances on the undulating course, avoiding the pelotons flying past,  and headed back into T2. Paul with the 10th fastest bike split in his age group in 2.48. Bex, riding within herself, and on her trusty roadie, (though TT bike has now been delivered – whoop whoop!) coming in in 3.20. Both Paul and Bex ran consistently, Paul finishing in  5:13, which I believe is a pb on that course, and 17th overall, a lot of them bunched together at the end.  A great start to the season, especially taking into considering he was still recovering from a chesty cold. Bex in 6.13 in her 2nd ever 70.3. Bags of potential, and so much more to come, very excited about this year. Nige had a solid swim and bike, not surprisingly struggled with fatigue on the run but still came home in a very respectable time considering he hasn’t been back in training long at all after a long time out. 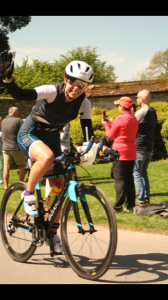 Next up were Marianne and Sarah. Both were heading into their 2nd only 70.3 distance, so decided to pick a really hilly one, with an extra mile thrown in for good measure on the run! Still rather early in the season for getting in open water if you ask me, but the full distance was swum (although I gather it’s so shallow in areas they can walk)  – I think all the duck poo kept the water a bit warmer. 2 mins separated them in the swim, Sarah coming in in 34 mins and Marianne 36 mins. Then off they went to work on the hills. Marianne’s consistency and hard work on the Turbo over the winter paid off, flying around in the 4th fastest female split, 1st in her AG in 3.11, passing Sarah at some point, who put in a solid ride of 3.26. Onto the run, and Sarah continued with super consistency throughout the 3 disciplines, posting a 2.11 placing her 3rd in her AG overall and 8th female. Marianne finished less than 2 mins later, also 3rd in her AG and 9th overall. Top 10 finish for both is fantastic for their first race in the season, and 2nd ever attempt at this distance.

So, whilst they were all recovering this week, we had Rachael and Cath taking on the Grafman Middle distance and Derek taking on the Aquabike. (Unfortunately due to some incompetency on our point, I could not join Derek as Ade was working on the Sunday so parental responsibilities took priority! )Becky and Richard were racing at Eton in the ETU qualifiers and Mark was racing there in the Open Race. Also, over in Barcelona, George was racing in his first race of the season, IM 70.3.

On the Saturday we also had personal challenges taking place as Eric decided to take on the Jurassic Beast 100 miler Challenge and Marta, took on the shorter course, as a step up in distance and time in the saddle. As I couldn’t make the race on Sunday, I also decided to check out the Jurassic Beast course early Saturday. Wow- they really do find every nasty hill in Dorset don’t they!!  – A beautiful tour of Dorset, which is far from flat. Eric’s target was 7hrs 30 ish including stops for food etc, and finished in 7.32 – that’s not bad pace awareness! Marta missing out on Silver by 2mins, though that was certainly eaten up by a fall during the race. All ok though, and determined as ever!  As for me, well my challenge was a 5-6 hour ride and see if my leg would hold out for a 45min run off – another goal achieved. Not the speediest but pain free, and another run set successfully completed – thats 4 weeks now of consistent running!! Have not achieved that in 4 years!

At the Grafman, unfortunately due to fog the swim was cancelled and the race was delayed. So Derek drove a long way for a bike ride, but took the opportunity to practice nutrition and pacing in prep for Romania. It all seemed to go pretty well, as he  was the first in his AG! Cath took her TT bike our for a burn, and put in a solid bike and run, coming in 3rd in her AG, a great day out in prep for IM Austria. Rachael also had a good bike, knocking 6 mins off her previous time there, and not yet having her TT bike to play on! I know there was disappointment not to nail a pb on the run, but after a week of full on cold, it was still a solid effort, and 2nd fastest in AG, finishing 4th overall in AG. Its a shame there was no swim, but both Cath and Rachael have a 3.8km Swim planned next weekend to make up for it!

Liam who joined the team this year, decided to tackle the Slateman as his first triathlon! No point in starting with a flat one is there! A freezing swim followed by a hilly bike, finishing with a run that is up then down. It is clear from the race that Liam has some power, and put in a great effort for his first race, and most importantly loved it! Looks like the next focus could be Slovenia at the end of the season. A completely different experience! Looking forward to making the most of that power over the next few months

Meanwhile, Becky and Richard were racing in the ETU qualifiers at Eton. This is Becky’s 3rd race this season, slowly ticking off all the distances, starting with the elite duathlon champs, then the standard distance champs, and now the ETU sprint! A talented and adaptable athlete who takes on all of the racing challenges!  Despite taking a while to get going in the swim, Becky put her foot down on the bike, dragging a fair few athletes around with her. Posting the fastest bike split, and putting in a solid run, Becky finished 2nd in her AG, very close to 1st place. I am looking forward to those middle distance races coming up soon!!  Richard also put in a great race with a lot of competition, and a decent swim, quick bike and solid run meant job done and qualification slot achieved – an excelent performance considering that he was only able to return to training following a 3 month lay off in March.

Onto sunnier climates, George racing at Barcelona, put in a solid swim, though drafting a swimmer who was after a longer swim is not always the best plan! George entered T2 in 32mins, despite swimming a bit further than planned. The bike is hilly, and full of pelotons (much like Mallorca it would seem – I’m sure these races are meant to be non drafting?), so 2.48 is a solid bike split on that course. Onto the run, and despite missing a block of run training due to picking up a foot injury at his last half marathon event, George still posted a 1.26 split, which placed him 25th overall in a field where 22 mins separated the top 25 and included athletes from 8 different countries, which is cool!!

Finally, and by no means least, Anthony, who’s love is Ironman events, lined up in the Cotswold standard for a bit of race practice, after completing a sprint duathlon earlier this year, sandwiched nicely with Marbella (where he posted a course pb – despite IM failing to record his finish!) , and had a solid race throughout. Now its time to take on the mountains and see how that snazzy S5 performs! Just a few days now, we will be heading out to the French Alps for the first week of our annual training camp, for some iconic mountain climbs, stunning runs, and maybe chilly mountain lake swims. (well and pool  – which has views of the mountains as well, just a lot warmer!)

Then, lots more racing from the team! We have the Challenge World Championships in Slovakia which Steve and I will be heading to along with Adam in the Open event. Luxembourg is fast approaching, as is Weert ETU Championships, not to mention marathons,, 10ks, 5ks,  long swims, Spartan crazy events of running long distances with crazy obstacles to overcome along the way!  AND…….dont hold your breath, but I have just heard that our kit is in the process of being delivered!