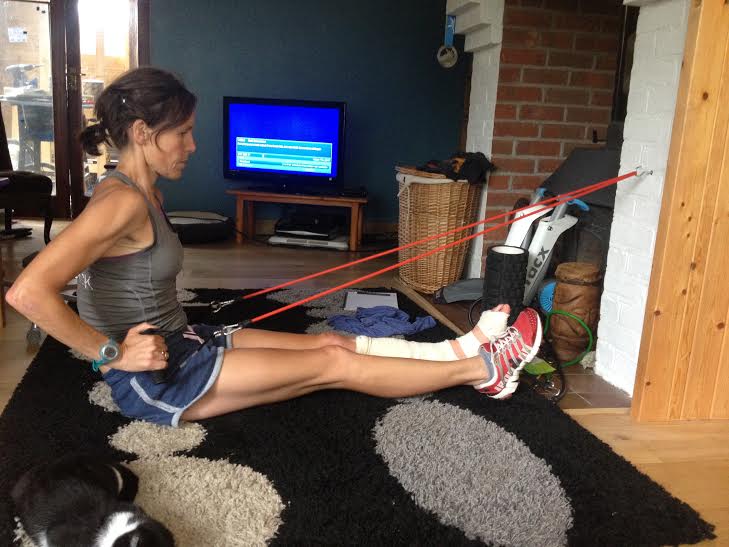 This all started 2-3 years ago, when I initially damaged my AFTL ligament in my left ankle. After no doubt returning to running too soon, I then turned it over again in Lanzerote on some volcanic rock, then again 3-4 times in 2 months running off road. At that point,  I decided that running off road was making it worse, so I  stuck to roads and running machines and worked hard at developing strength and power and improving balance in my left ankle. Unfortunately, In Wiesbaden 2015, after a great season to date, I finished it off on the 3rd lap of the run, felt it go, and knew it was bad but pushed that to the back of my mind, wanting to finish, and make the World Championships the following month.  Despite convincing myself it would be fine, it wasn’t, and the World championships were a disaster, and I went into the Winter, knowing that an operation was going to be on the cards.  Well, after 4 months of pfaffing and trying to convince myself I could see out the season if I was careful, still race, and go for the op after Mallorca Ironman, I soon came to realise after some very poor race performances, DNF’s and a significant drop in power on the bike, that there was no way I could run an Ironman. 10 minutes was proving tricky!  So, another 5 months later, 2 weeks ago now to be precise, I went in for ligament reconstruction surgery, known as the Modified Bostrom Repair.

Going from training every day to NOTHING, is hard. The first few days post operation it doesn’t enter your mind, as it really does hurt, but once the pain becomes a bit more manageable and the ability to move around on crutches improves, frustration starts to seep in. As the family around you disappear on their runs / swims/ bike rides, and you cant even hobble around for more than 10 minutes before your foot doubles in size (in the plaster) and throbs like anything, it is a mental task to stay sane. My family may argue that I have failed in this task, but on the whole, personally I think I have managed pretty well, and they haven’t left yet!!

After week 1 I added a bit of structure through strength and conditioning – Not much but something. Now, 2 weeks post operation, the plaster has been removed, stitches taken out, (which resulted in me nearly passing out!) and an air cast boot put in its place. 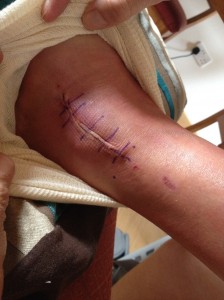 A bit swollen and blue, and my ankle modelling days are well and truly over, but the time has come that I can start moving forward with rehabilitation. Over the next 4 weeks I can start to weight bear with crutches and boot,  and I can begin to plantarflex and dorsiflex the foot (though absolutely no inversion or eversion ) and hopefully as from next week I can get back in the pool and even on the turbo – pain permitting!  So, the plan is to head over to France for a couple of weeks, get some sunshine and some R and R by Allemont outside pool, dipping in for a bit of swimming and ankle mobilisation. Then head back via Wiesbaden, to watch goalspecific Clodie, Evan, and Mark race in the European Championships – very jealous, having raced there the last few years, but I will be back again next year! Then only a few more weeks until I will be able to ditch the boot, swim the first section of Vichy, and come back in September to a bit more structured swim bike training. Running will have to wait for a bit longer, but I can live with that if I am doing something constructive. Back to Hospital in September for physio and the introduction of inversion / eversion, and than perhaps I can start contemplating after 12 weeks the idea of  introducing some running into my training. Hate to think how slow it will be, but I will keep you posted on the progress!!