Well in the last week of Jan, start of Feb, myself, Clodie, Mark, Evan, Sharon and Derek, headed over to Lanzerote, for a week of training in the sunshine and wind!  What can I say, a week of sunshine (and a bit of wind) first time out on the bike since October, 4-6 hours of training every day, not a drop of rain, and an outside pool that was pretty empty when we showed up! 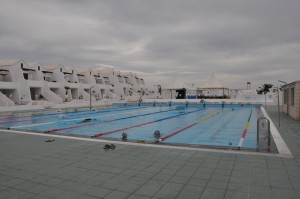 We were all staying at the Sands Beach Hotel, which to be honest, was ideally situated for getting out to visit the Island on the bike, it had a great coastal path to run along, and the 8 laned 25m pool was fantastic (all be it a little chilly, but great in a wetsuit!). Mark did a fantastic job of navigating us around the Island on many 4-5 hour rides, which included a trip up (and down and up) Tabeyesco mountain, (not to mention the hour hill reps in Teguise, close to our hotel, which was short but steep and into a rather nasty head wind, but rewarding none the less!). It must have been the  Tuna Pasta a la Evan and Mark that kept  us all going!  I have to say I loved the North part of the Island, and the roads, driver awareness, and temperature makes it a perfect place to go for some winter training. Many of our rides were finished with a run up and down the coastline, chasing Evan, who was a like a coiled sprint wanting to unleash, (if it wasn’t for the somewhat over sized (and mainly British) tourists, walking 10 abreast, with limited self awareness, resulting in a fair bit or lateral plane movement training! – Not complaining though, it certainly beats the driving rain and wind of the UK, and it was very quiet on our early runs. However, I was somewhat surprised to hear that not one person stopped to see if Derek was ok when he went diving over some (pretty obvious to be honest) rocks of Lava along side one of the paths!, leaving a fair bit of his skin there and giving himself a sizable lump on his quad. Fortunately, although  bruised and cut there was no severe damage done.

Our swims were always post lunch, after a brick or long ride in the morning, and the pool was always quiet around this time. We stuck to the wetsuit option, as the water was chilly, but to be honest, when the skies were blue and the sun was out, Im not sure we really needed them. Huge thumbs up to Clodie here, who was the only one, (along with me) who completed all the swim sets as stated, as well as all the riding / running and s and c, which got us up to about 30 hours for the week. I believe it was sleep that won for the boys on a couple of occasions, and I cant blame them for that!

I really do miss that pool!

Thank you to Chaz and Dave, who smiled from start to finish on their trips around the Island (unfortunately I do not have a photo of these beasts,)but  they kept our spirits up when fighting a head on wind, for what seemed like hours!

Thanks to Derek for the photos, and if you fancy joining up for Lanzerote Training Camp 2017, we will be going!

At least its only a few weeks to go before Camp Mallorca! 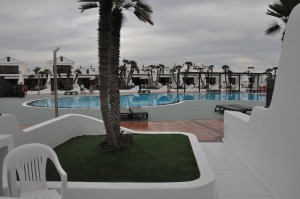