After a not so perfect build up with a sprained ankle 3 weeks out I was finally given the go ahead to try a short run on the Thursday before the race. This went ok but not without some discomfort and so I was expecting to have to walk at least some if not most of the marathon.  My TT bike gears stopped working the weekend before and with no time to get the bike to the shop for repairs I had to make the decision to set my road bike up to race instead.

I was nervous before the start, I’m not a strong swimmer and it’s always that part of a triathlon that I dread, however the lake looked calm and the turn buoys didn’t look that far away!  It was a rolling start and I lined up between the 1:15 and 1:20 markers and once the pro’s were set off we slowly made our way to the ramp.  There was no warm up swim allowed so it was straight down the ramp and away and almost immediately I was being hit on the head, dunked under and was guzzling too much yukky water!  I never managed to find any clear water for the whole swim but perhaps that was because I was so determined to swim right next to the buoys so that I didn’t swim any excess meters!  The plan worked and I got out in 1:15 which is pretty good going for me.  T1 was very muddy and with my ankle  I had to be careful picking my way through the change tent and out to the mount line.  The bike course consists of approximately a 14 mile ride from T1 to the main loops of the course, then it’s 2 loops and back to T2.  The first 14 miles goes through the suburbs and isn’t very inspiring but once onto the loops it’s into the countryside with a couple of very well supported climbs, plenty of undulating sections and a flatish part where you can get your head down so long as the wind is in the right direction (it wasn’t very kind on Sunday!).  I had a few issues on the bike,  my bar bottle kept leaking sports drink all over my front wheel and rims causing a few braking issues so I had to take the decision to stop using it and just use the bottle on my frame.  I also developed a really intense pain in my abdomen, a bit like a really bad stitch but both sides, it built as the bike went on until by the time I got to T2 I could hardly bear to turn the peddles and running was impossible.  I took a couple of minutes to calm down and get changed and then set off on the run but the pain was so bad I was walking again after about 100m.  I kept trying a little run, then a walk, then a run again until I managed to keep running and then I started to pick the pace up.  I assumed my ankle would cause issues at some point no matter what pace I went at so decided to just run as hard as I dare before I had to stop.  The run is approximately 8 miles from T2 to Bolton centre, you then complete 3 loops of around 6 miles with one hill and then a long drag up to the turn around then back downhill.  Once I’d got myself running and was controlling the pain (both with pain killers and breathing) I actually started to enjoy myself, the crowds were fantastic with plenty of distractions along the way!  At the final turnaround I saw a woman I knew was in my age group and made the decision to pick my pace up and look strong as I went past in the hope she didn’t try to hang on, the plan worked and I went straight past her without any reaction.  Obviously with the rolling start it’s impossible to know whether she was actually in front time wise, I just thought it best to get past her!  I managed to run the whole marathon except for walking through the feed stations with no issues from my ankle so I was really pleased.  My total time was 12:19:53, I bit slower that I was hoping for but considering the ankle issues I can’t be too disappointed.  I got a PB in the swim and on the run so all in all a good day. 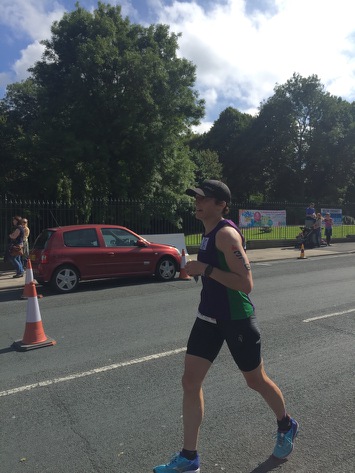