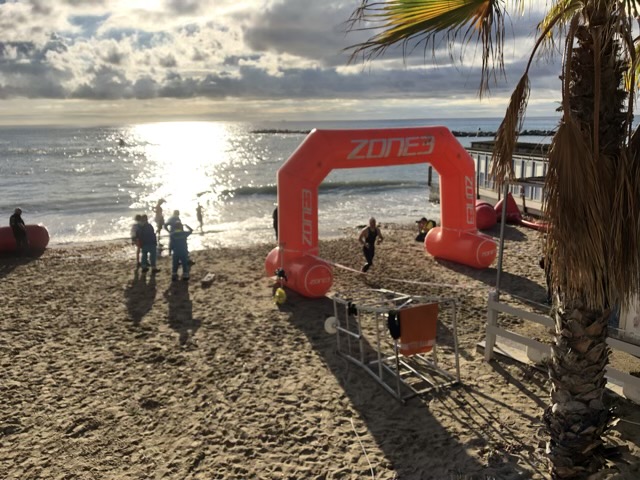 On the weekend 17th/18th September we were spoiled for IM action in the team with Katie and Sean in action in the full distance in Italy and Richard, George P and Elissa tempting the weather gods at Weymouth. At least that was the way round we had it but it turns out Weymouth is now a Mediterranean paradise and Italy not so much. The IM was meant to be on Saturday but a full on hurricane put paid to that so the organisers decided a 24 hr postponement was the order of the day and ran the IM and 70.3 side by side. Katie had an amazing day – strong in all 3 disciplines and finishing her first full ironman in an excellent 13hr12min. Meanwhile Sean was taking the course to bits and came off the bike in a podium position and well on course for his Kona slot. However, ironman racing is unpredictable, not all was quite right on the run and despite holding his position for 32km, the last 10km was tough. Sean still managed an 11th place finish in a super quick 9hrs29min – even though it wasn’t quite the race execution he was after. Still – after a quick chat with Fran, Sean decided to throw his hat in the ring one more time this year with an entry into IM Portugal – more to come on that in the next blog……….. 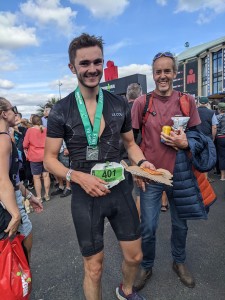 Over in sunny Weymouth, George P, in only his 2nd ever triathlon and riding a titanium touring bike, was busy showing everyone that he is taking to this game fairly quickly! A strong swim and bike before possibly going off a bit hard in the run but managing to peg it back and finish in a brilliant 5hr38min. Richard was also having a great race although his excellent 32min swim was somewhat overshadowed by returning to transition to find his bike had been knocked off the rack , bottle smashed, nutrition all over the floor and chain off and his gears had been knocked so weren’t functioning correctly. So 9mins lost but still managed a great bike split and finished it off with a strong run in 5hr44min, taking a massive 22mins off his time from last year despite the transition issues. After her disappointment at Ironman Bolton, Elissa has a super strong race to put the demons to bed and finish with a smile on her face – great racing

On the same day, Emma was storming her way to 2nd place in her age group in the Darley Lake Duathlon sprint qualifier for the European Championships next year with an excellent all round race as she continues to go from strength to strength.

The following weekend Fran, Becky, Annie and Fin decided to make a last minute dash to the brand new Challenge San Remo while Izzy was lining up in the ETU middle distance triathlon champs in Bilbao, Spain. Now we should all know by now that if Fran says ‘this looks like a fun race’ we should translate it as ‘this race will have a near vertical bike ride, your can count on it’. And so it turned out to be this time. Fortunately the race was on Sunday as this gave Italy time to remember where it is and become warm and dry again. No such luck for Izzy in Bilbao though as Spain was still suffering a similar identity problem and the ETU race kicked off in what can only be described as distinctly British weather. This didn’t bother Izzy though as she had a great swim and strong bike despite being sensibly cagey on the slippery descents to come out of T2 in 3rd place, 7mins down on a silver medal. Izzy is a great runner though and it soon became apparent on the tracker that if she could sustain her pace she would get there. And sure enough, in the last couple of km Izzy stormed through to take a brilliant 2nd place and her first major championship medal 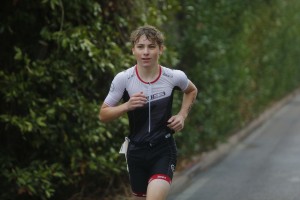 In San Remo, Fin was racing in his first ever sprint on Saturday and put in a great race, finishing 4th in his age group despite breaking his goggles in the swim which cost several minutes. On Sunday, Annie Fran and Becky lined up for the middle distance. Annie had not been well and decided to do the swim and 40km of the bike as a bit of training. Becky stormed the swim, starting in the last wave but swimming through all the other age group females to exit transition first. 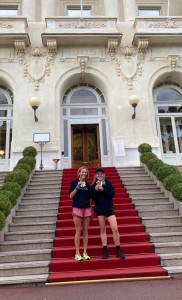 Fran also swam well and both went out on the bike. One small and one big mountain later and they were back – having gapped the rest if the age group field by 3-4mins with Becky still first overall. She carried on in the same style – running super well – first age grouper, obviously first in her age group and beating a couple of pro athletes as well. Fran was a bit cagey on the run but had time to spare and also won her age group by several minutes. On top of that, Becky won her second Wahoo watch for the fastest transitions and Fran won a nice Asos aero helmet for having the fastest bike split in the race – so basically between them they cleaned up! Great racing