Well if you follow us on instagram and facebook, there has been so much fantastic racing happening over the last few weeks! Here’s a quick summary…..

Liam, going from strength to strength in his Olympic distance races from the Slateman to the fugitive (and hopefully Slovenia in Sept!)

Mike, taking on first Iron distance event, loving it, then rocking up a week later to finish 5th overall and win his age group in the Swanage Sprint Triathlon

AND so much more.

Then of course we had Derek and Becky’s top performances in Romania! Derek’s race report is below, and Becky’s to follow soon, so I will let them explain their races, but to say it made our weekend out there would be an understatement after we had a stressful night, relying on good friends taxiing our kids around Dorset and to A and E! (That’s another story!! )

More important, excellent race execution from both Becky and Derek leading to great outcomes with Becky storming to a 4.31 finish in the middle  – a gold medal in the 30-34 age group and the second fastest age group time of the day and Derek……… well he’s what he had to say:

My first complete aquabike race at middle distance and in the heart of Transylvania.  But no need to worry about the Romanians that we saw in the daytime at least, they were all friendly and helpful.  As were the race officials.  In the end the race was well organised, it is just a pity that the international European and World series events are heavy on formalities.  The GB team race briefings nearly always give the athletes a sleepless night by highlighting all of the ways you can get in to trouble.  So, race morning and into a standard routine, or is it panic?  Well, it could be for me because it was declared to be a non-wetsuit swim, given that the water was measured as just a half a degree above the ‘wetsuit optional’ limit!!  This race also had a split T1 – T2 transition just to add to the likely confusion.  But, no panic!  As ever, come race day, focusing on the race banishes all worries and I can think clearly about racing and forget the incidentals. 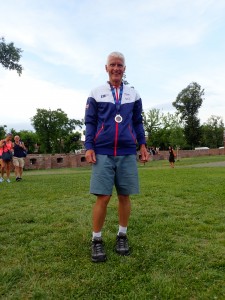 As with all events like this there are several hundred athletes in different age-groups and so we wait in ‘pens’ for our turn to start, in this case sheltering from the heat in the shade of waterside trees.  Then the stirring music down to the water’s edge and finally the klaxon.  And then a choice, automatic get round the course, or a more considered ‘race attitude’ thinking about where to attack and force the pace and then when to drink or feed.  It has to be the latter because afterwards you will need to know that you did your best.  Today the water was warm and the sun was shining on the bike leg so no energy needed for keeping warm, quite the opposite – how to cool down.  This bike race was a four lap race with dead turns in the road so plenty of time to see who you might catch, or who was catching you and the short sharp hills, four times for each of them.  And, in the end, the final run-in to the finish where I discovered that I had posted a lousy swim time but the best bike leg of my age-group to take a silver medal, just 30 seconds short of catching the race winner.  Great celebrations, a podium finish and a pre-qualified opportunity to race again next year in Austria.  A happy 10 days exploring and racing in Romania with Austria to follow?