Home / Blog • Featured • Results / From the worlds in Australia, to Duathlons in Dorset!

Well, even though we are getting late in the season, and racing is on the whole getting less, goalspecific athletes are still at it around the world! First up, we had Derek and Brendan, who had qualified for the World Duathlon Championships in Australia, Brendan in the standard and Derek in the Sprint. Both of them have been managing heel / ankle issues, so went into the race with minimal run training, however despite this, they both performed very well in their respective age groups. Brendan in an incredibly large competitive age group, finished 3rd Brit, and 15th overall, Derek, (who will be moving up an age group next year) finished 8th overall and first Brit. Fantastic. Derek and Sharon are now having a well deserved holiday, and Brendan is flying back, so reports from them will follow on their race experience!

Next up was Claude, in the Thruxton Duathlon.  I think this was the first weekend he had been in the country for a while, to say he has got some air miles in over the last few months would be an understatement, however, he has still managed to consistently train around the work and travel, managing as well as he can in the situations he has found himself in! It had meant limited bike training, however, this didnt stop him with his best performance yet, finishing first in his age group, and 6th overall! Claudes race report is below: 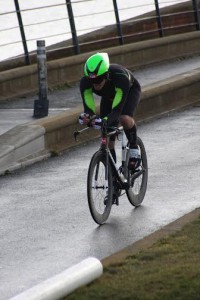 “Mass Attack Sprint Duathlon (4km run – 20km cycle – 4 km run), Thruxton, October 18th 2015: With training being significantly disrupted due to extensive travel work – in the last 3 weeks I had to travel to China, NZ, Spain and Ireland -  I turned up for this event not expecting much and with little to lose. It was a slightly breezy day but dry and clear weather promised a good event. The event is held on the Thruxton race track so no chance of getting lost and a great surface for the bike. About 65 people lined up for the sprint distance (they also run a standard distance race) which started at a very civil time of 12:30. I was surprised and astonished to find myself in the leading group of 10 runners for the first run although the front runners pulled away after 2 km. I finished the first run in 14:40 and was placed 11th into transition. A quickish T1 allowed me to overtake 2 people and then after a good cycle (30:35) I had overtaken another 5 people and came out of T2 in 4th place. Unfortunately I couldn’t match my first run and was overtaken by 2 quicker runners early on into the 2nd run but managed to stay ahead of the pack for the remainder of the run finishing my second run in 15:30. I completed the event in 1 hr 03 min, finishing 6th overall and 1st out of 14th for my age category. Just enough time to jump in the car and race to Poole to see the last 15mins of Samuel’s Wareham Rangers U13 football team stuff Parkstone 10-2. Do Sundays get better then that?”

Finally, Clodie convinced me to join her for a training run  in Christchurch! This was the half marathon, rundorset event. – After an early start on the saturday and a long day in Hampshire assessing potential Level 1 Triathlon Coaches (who were great!) I really was un enthusiastic about another early start, especially for running! However, I dragged myself over to Christchurch, and lined up with the other fools. Not 5 mins into the run we were all sent the wrong way, so the organisers decided the best way to deal with it was to just turn everyone around before going into a narrow section. Yep that meant the back of the field were now leading and the fast runners had to weave in and out of the masses to find their position again….not a great way to start!  Now due to injury, I have never actually run a half marathon running race, so was interested to see what I could post, even though I had tired legs….However  poor signposting sent me disappearing down the wrong path! Took me until I came to a junction with no signs to realise my error so I doubled back! Entertainingly my half marathon ended up as 15 miles, and Clodies, who managed to successfully keep to the course, finished clocking up 14 miles, so if you want an accurate well organised race, best to avoid this one…. I went from 2nd to 7th, and Clodie, finished early 1:50s – if it had been accurate it would have been a massive pb!!

So, next race for me and Clodie is the Ballbuster duathlon, cant say Im looking forward to it too much!