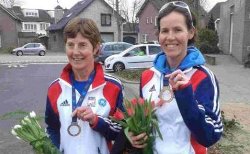 A trio of Purbeck Triathlon Club athletes brought home a gold and silver medal from the European Sprint Duathlon Championships in Horst, Nether-lands.

The event consisted of a 5k run followed by a 20k bike ride and then a second run of 2.8k with entrants competing in a range of age groups.

Fran Bungay was in scintillating form to win the F35 category in a time of 1hr 6min after pulling away from fellow British athlete Christine Bertram.

All three TriPurbeck competitors lead their age groups going into the bike ride and Sharon Bardsley just lost out in a head-to-head battle with her German counterpart to finish second in 1hr 18min.

Meanwhile, David Bardsley ran a personal best over 5k and even though he cycled well it was not enough to get among the medals in the M60 category. He came seventh in 1hr 11min

Details of how to get involved with the club can be found at tripurbeck.com