Congratulations to all of the athletes lining up last weekend to face the mud, rain hills, and general off road craziness over at Bovington for the annual Dirty Devil Weekend.  Some great results from Goalspecific and Tripurbeck! Paddy, after marshaling, decided to line up in the 10k despite a niggling calf strain, but it certainly didnt stop him, as he came home 2nd place overall! Tripurbeck members Edd Britton came in not far behind in 12th, and Hannah Sealey posted a fantastic 3rd place!  Eric posted a pb despite nursing a foot injury, and seems to be just going from strength to strength! Justin M after a hard swim and strength and conditioning session on Saturday, plus an interval set on Friday, rolled up to the 15k and came home in 3rd place, so he is definitely getting into very good shape for the Otillo later this year! Also racing were Liz G, Rose, Scarlett, and many many more, so if you havent had a chance to look at all the fabulous photos and race results head over to https://www.fullonsport.com/event/the-dirty-devil-duathlon-2017/results

However the notable achievement of the day goes to Terri, and below is her race report so below is a race report. She is truly inspiration in her continual determination to train and race despite the constant obstacles that she is having to fight!

The most enjoyable 10km I’ve ever run – and the most unexpected!

Having had to significantly cut back on training since November due to a significant flare of Crohn’s Disease, this was meant to be my easily achievable 5km return to running event, and given the conditions – thigh deep icy ‘puddles’, mud in copious amounts and hills (still learning to love these), the first of this year’s monthly challenges, raising money for five fabulous charities.

5km I thought,…no problem I thought…I ran two half marathons and completed a half ironman (relay swim run leg) last year… so there will be mud…and hills…and thigh deep water… but it’s just 5km!

Sooooo…that moment when you’ve been picked up, you’re in the car and you’re on your way… and your friends confess that they’ve signed you up for double the distance!

Given last year’s achievements why worry about a 10km run? The current 3 month flare of Crohn’s,disease has been more than a little debilitating and training has been sparse to say the least. I’ve spent the last month on a high dose of steroids and I was due start a low dose chemotherapy drug that night (having delayed the start date by a couple of days, determined to complete this event) Running has proved rather problematic recently, suffice to say I’ve taken up off road running and am now the proud owner of my first ever pair of trail running shoes! However, I’ve only managed a couple of 5km runs since January – hence a rising panic for most of the journey. I had been worried about running for 30 – 40 minutes, let alone double that! No gels or fuel … and no more Imodium! (I can’t eat before I run, as food is a major trigger of unwanted symptoms!)

However, what I may lack in self-confidence and self-belief, I make up for in determination. I’ve learnt a lot about mental strength the last 12 months; holding onto my newfound conviction that anything is possible and that I can actually achieve more than I think I can when I commit to pushing beyond my perceived limits, I decided to embrace this unexpected twist to my challenge… and loved every minute!

The last time I ran through mud and puddles was probably more than 30 years ago, where I would’ve been found lingering at the back and uncharacteristically mucking around during the torment known as the school cross-country run. Not that you could really call these ‘puddles’. Lining up at the start a few runners were trying to dodge the puddles (1-2cm of water), whilst others took great pleasure in jumping in them! I failed miserably with the dodging, whilst trying desperately to avoid knocking over the photographer, during my overly exuberant start line sprint! No need to worry, just after the start there was a sharp right turn and what lay beyond was hidden by the banking… the first of many thigh deep ‘ponds’ (definitely not a puddle) of about 3m wide and 10m long… and the only way through was, well through… just had to laugh… and I don’t think we stopped laughing or smiling for the next 9km! What a fantastic event BustinSkin put on. Ran some, walked some, waded quite a lot, splashed even more and got gloriously covered in mud! Brilliant!

And I loved the second loop even more… going back next year for a third! 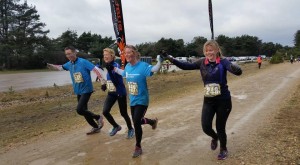