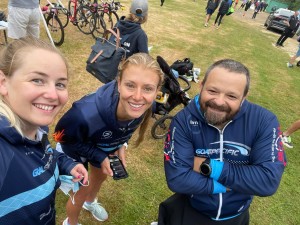 This weekend saw Goalspecific Claire and Richard racing at Cotswolds on the Saturday and Jess, Louise, Mike and David on the Sunday.  Then later in the day on Sunday, Becky and Salam took on the Torbay Sprint and Georgia the London 10k . Despite the hot weather leading up to it, the Friday storm cooled the lake down a bit for a wetsuit swim, but a very weedy one! Looks like a few of them went further afield to avoid the weeds judging by swim distance, however, all athletes made it out in one piece, and went to work on the bike and off road run. Its been years since I have done this race, but I do remember the lumpy grass and rabbit holes you had to avoid, which from the general feedback hadn’t changed!  Another great performance all around, solid races from Claire and Richard in his first ever standard distance race and looks like Mike thoroughly enjoyed his trip out on his TT bike with a great time and 4th place AG finish, and Jess and Louise stepped up in their second tri ever, with Jess finishing 3rd in AG and Louise 3rd out of the swim overall!. Also an impressive tri debut from Dave who hasn’t raced in 6 years!! Wow, lets hope its a bit less time until the next one!  Whilst they were taking on the weeds of Cotswolds, Ritch and Jon had a very wavy Weymouth swim taking on the various distances, and Katie had a calmer afternoon for her 1500m event. All goals achieved, and Katie just seems to be getting faster all the time! Great work. 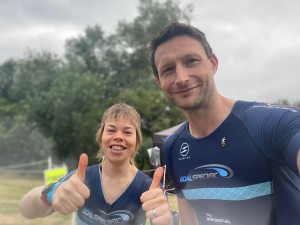 Georgia took on the hot and sweaty London 10k and posted a great time of circa 38mins, despite being sent off in completely the wrong wave, and worrying about the impact of this for the whole race. 10mile road race next in Holland then back to triathlon with  Sardinia 70.3 later in the season. Then finally Salam and Becky had to wait until 3pm for a 400m pool swim, 15k bike and 5k run in Torbay. Only a week out from Staffs, Salam would definitely be carrying a bit of fatigue, but the opportunity to gain some more bike handling experience on her new bike was definitely worth it. Rather frustratingly the marshal looking after Becky on the swim made her swim 50m more than she should have done, which in a sprint race has quite an impact, however, they both still put in solid performances finishing 6th and 7th overall female.  Another great weekend of racing.

Next weekend, we have the London Triathlon and Big Cow to name a few, so more to follow, in the meantime, one more week for me before I can get back in the pool, but no sticks indoors now, work can commence on the cross trainer and mobility improving! 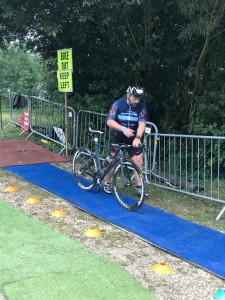 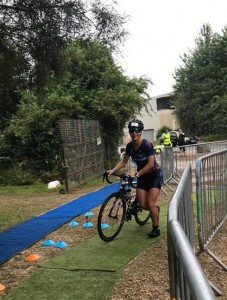