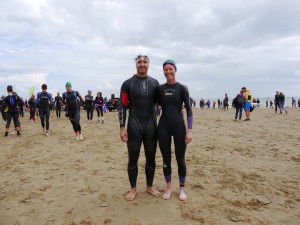 Feels like years ago now! Found this race very difficult to focus on, as the monday after the race our Training Camp in the Alps started, so if I am honest, my head was in France, not Italy. It was also not the nicest of places, wet, windy, and as it always seems the way at the moment, everything was a mad rush. Due to traffic we missed the briefing on the saturday and the registration was far from informative! However, Mark and myself in wetsuits, and the 3 mad kids in swimming costumes, tested out the water temp on the saturday afternoon and drove the bike course. If Im honest, I wish I hadnt! It was TERRIBLE….road didnt even exist in places so wasn’t sure how they were going to sort out half a road with a there and back course! There were cobbles at the top of the climb and more pot holes than smooth road!  Bearing in mind it was a European Championship event, I was surprised, but same for everyone, so the key was to be careful!

Race start was mid morning, (hate mid morning starts, just want to get up and get on with it!) Sea was choppy but much improved from Friday. I went before Mark at 11: 20, and he started 15mins afterwards – so I knew Mark would be hounding be down for the entire ride (well I wish he had been). My swim was mediocre at best, though I believe it came up a bit long, so was looking forward to getting on the bike, despite concerns of the course. If Im honest, I just never really got into this race, it was all a bit of a slog.Whether it was lack of sleep, poor preparation, and just not having the mind set, due to the following weeks camp, Im not sure, but I usually enjoy the race, and the challenge, but I just wanted to finish this one. Then 50km into the ride, my water bottle came loose at the top screw falling out and sideways hitting my pedal, which together with the weight of the bottle in it, wrenched it out of its housing at the bottom. So a pit stop was required to survey the damage! At that point, wasnt sure whether the frame was cracked or just the gel coat damaged, but I knew I had a fair bit still to go, with no nutrition and a potentially damaged frame. (I wasnt in the best of spirits at this point!) So, once back in T2 I took a bit of time to get some fuel on board, before heading out on the run. I wasnt even aware of the fact that at this point I was in silver position which was gold after the first lap! However, lack of fueling and mental determination meant I tailed off on the run, and came in 3rd.  My biggest concern on the there and back run was that I never saw Mark!, My first question to Ade was where was he, only to find out that he was in hospital, taken out on his bike just after leaving T1 at a big roundabout, by someone riding too fast, and trying to overtake on the inside, but didnt have the room, so took out Mark instead……then cycled off!!!! So Mark was lying in a hospital bed in Rimini, with what was later diagnosed as a fractured Pelvis. Nightmare. So our post race celebrations (which was planning to be a take away pizza in the van as we drove to Camp Alps! ) ended up as frantically trying to get all of Marks race kit. packing it up for him, then emptying out our apartment, packing the van and finding him at the hospital (which is a story in itself!)  to see what the plan was. (Nope, missed out on that post race nutrition / massage / awards night etc etc

) It was really good to see him, but HORRIBLE having to leave him in Italy, when he should have been coming to train with us and the other athletes at our camp. It was Thursday of the following week, he finally flew home and is now in Poole Hospital, with the same diagnosis, 5 weeks more of no weight bearing! However, Mark being Mark,  is already planning a different race schedule for the end of the season and has remained positive throughout! Well impressed

(Already pestering the physios to see when he can start swimming!)

As for us, we left Italy close to 11pm (bit later than we had planned!) and got to our place in the Alps at 6am, with keen riders turning up at 9:30 for the first training day of the week! …..who needs sleep!

Actually, we felt surprisingly ok on the Monday!  Next blog will be on our training camp, which was brilliant, lots of fun, lots of training and plenty of sunshine!  Cant wait for the next one, though re thinking pre race schedule next time!