Whilst myself and the family disappeared to our beautiful little house nestled in the French mountains, some of our goalspecific athletes were battling with the elements back in good old blighty! Alison was first up, racing in Bustinskin Half marathon, and put in a great effort after juggling university exams, poorly children, lack of sleep, and extreme tiredness – not surprisingly! However, coke kept her going through the run and she posted a sub 2:30 on an off road tough course. Also, well done to @tripurbeck Neil McDermot, who won the marathon – brilliant result!

Next up was Claude, racing at Eton Lake sprint Duathlon. The same race as last time, but much tougher conditions. First run was a sub 20, (first time the 20 mins has been broken! yeah) with much slicker transitions, a faster bike split despite conditions and still 4 seconds off second run split, so cannot argue with that! Finishing place was 19th overall, 6th in his age group!

Now onto the juniors! We had Serena and Sam racing in the Schools England X country championships final. Both were racing in the under 17 age group, so a fair few years younger, however that didnt seem to stop them. Sam came in position 49 out of 280 competitors, and Serena blew the 200 plus field away and came in 7th overall in a time of 19:45, just over 1 min behind the winning time. An outstanding performance.

Finally, but by no means least, Chris was racing in the New Forest Half marathon. The conditions here are tough, a very hilly, and believe off road course, I don’t think its called the heartbreaker for nothing! Chris finished 10th overall in the Male Open race, in a time of 1hr 34, another great start to the season

So all going well!

Now, back after some great skiing with the family and relaxing in the mountains, it is time I got racing. Looking forward to taking out my new Carncac bike, thanks to Planet X who are sponsoring me again this year. First key race for me is Horst European Long distance Championships in April, however, planning on a practice duathlon run in March with Brutal Events in Swanage. More to follow. 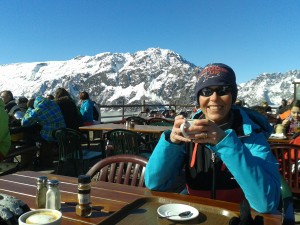