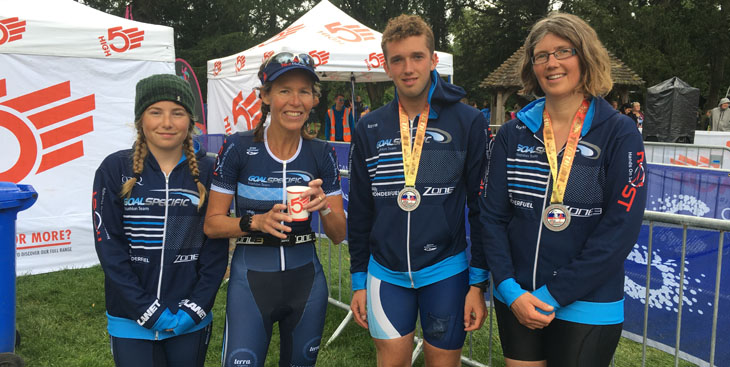 It seems a long time ago since Marianne’s excellent podium in IM 70.3 Oman and Izzy and Sarah’s duathlon qualifiers…….. probably because it is a long time! But with some modified racing returning at last the GS team athletes have been pulling out some great performances despite the uncertainty of the last few months.

Before we go in to those results it’s probably a good time to say that Fran and I have drawn a significant amount of inspiration from the approach that everyone has taken over the last few months – and had lots of fun with the virtual racing, online time trials, s and c and group chats -  it’s no surprise that everyone seems to have hit the ground running! Definitely planning to continue with some of the online stuff as we go into the winter block

So Mike was first to toe the start line at the UK ultimate half in August and in traditional UK style it was windy and chucking it down for most of the race. Undeterred, Mike delivered his fastest half distance yet – particularly impressive on a tough day especially for riding a bike.

The following week – Ollie and Martin both had good races at the New Forest middle and particularly good run splits finishing in 5.05 and 5.14 respectively and Mel produced a great performance after a long wait to do her first ever triathlon in the sprint – and most importantly she loved it! 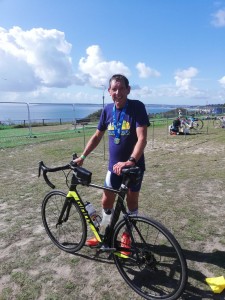 On the 6th Sept Izzy, Eric and Mike were racing in Bournemouth and Fran, Annie, Samuel and Tania were at the Shropshire triathlon. Awesome 4th pace overall and a storming time for an age group podium for Izzy in the standard distance race knocking big chunks of her bikes splits from last year – not surprising given how she was burning it up in the lock down TTs – and great races from both Eric – who broke his 10k pb on the run -  and Mike who was not far off a 5k pb in what turned out to be quite a high class field! Great pics - Izzy looking happy running uphill and Eric looking happy because he has finished. 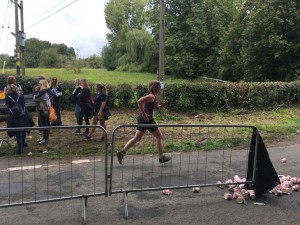 Meanwhile up in Shropshire Annie and Tania both had excellent races in the sprint – Annie had the second fastest swim split on the day and finished 13th overall and second in her age group and Tania was 6th in her age group looking strong throughout. Samuel raced his first standard distance race and put in consistent good performances across all 3 disciplines to also finish second in his age group and near the top end of the field despite being the youngest athlete racing by some way! In the middle distance, even though it was 22 degrees and sunny, Fran was freezing coming out of the water and complaining about her arms seizing up on the second lap. Undeterred she put in an exceptionally slow T1 – largely due to a lack of hand movement – before finally getting out on her bike trailing the lead girl (who turned out to be Louise Minchin) by about 7mins! It got better from 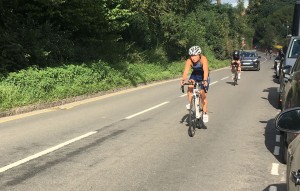 there though – gradual warm up on the bike to post the fastest split of the day but most importantly a solid, consistent half marathon on a very hilly course to hold off a fast finishing Amy Hinton to take the overall race win.

On the same day Claire was busy smashing her half marathon pb in Andover as a warm up to her first ever marathon which she also smashed – posting a 4hr24min finish and looking very strong throughout. Paul was so inspired he put in a late entry to the half at the same venue starting later in the day and also put in a strong performance – possibly because he is scared of his own running tights 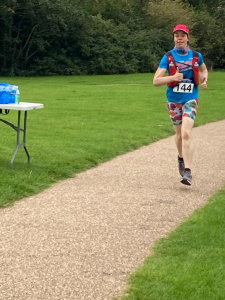 James was going great guns on the swim and bike before suffering some stomach issues (possibly due to the wavy conditions) and  had to make his way gingerly around the run course – plenty more to come from James who is racing in Dawlish next week. 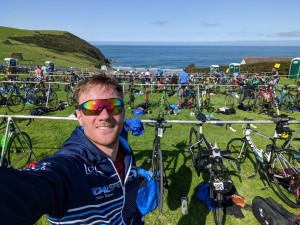 Martin was back in action at Dorney Lake triathlon and had a great race – as well as being his fastest Olympic Distance to date and quicker than his pre-race target he also managed to break his own 5k running pb on the second half of the 10k run. That’s what you call a strong finish

More racing coming up in the next few weeks (fingers crossed that they will be allowed to go ahead) with Marianne back in action at Cotswold 113, a few of us are racing F3 events in Henley on Sunday, New Forest marathon (second one for Claire) and half for Anna and Paul, Becky is at the Hever Castle Tri series on the 27th while Karen and Eric are racing in Southampton….. and then the duathlons start – oh we all love a duathlon don’t we?