Another exciting weekend from the Goalspecific Team, racing across the country and abroad, with some fantastic individual performances throughout. Ade and I are humbled by the attitude and application of the team, it truly is inspiring how they are performing week on week!

First up was those racing in the Sprint ETU Championship event on the Saturday. We had Julie in the 70-74 AG and Becky G in the 35-39 AG. Of course, Becky always likes to add extra challenge to racing, so decided to go for the double challenge over the weekend of the Sprint on the Saturday and Olympic on the Sunday! This was made a little more challenging as despite getting out there nice and early, the airline lost both Becky’s and Nick’s bikes, so they spent the week on mountain bikes. When they did finally receive them, Becky’s back hub was broken. Not the lead up you want into a Championship event, but it did not seem to dent the true race head Becky always seems to find, as she stormed the course securing the gold medal in her AG and 3rd overall. Julie also had a great race, and was in a strong field (faster than most of the AG below) put in a great swim and bike (despite a slight diversion) and came 5th overall. 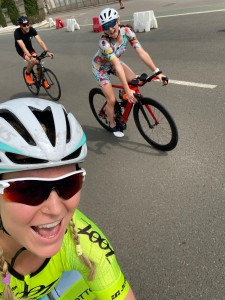 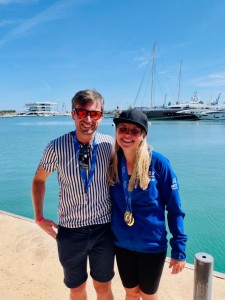 Next up on the Sunday in Valencia we had Izzy, Jen, Helene and Becky (again!) racing. It became a bit of an eventful one, as Izzy who put in a great race, sub 40 run, speedy swim and a really fast bike, ended up with a bitter sweet end to the race, as a wrong turn on the bike course resulted in missing a couple of km. This was not picked up by the officials, so she told the event organisers and ended up with a DQ.  This took courage, and illustrates her sportsmanship and integrity as an athlete, it must have been so disappointing knowing that you would have been on that podium, but there will definitely be more medals, Izzy is a force to be reckoned with!  Helene yet again stormed the bike with the 8th fastest bike time, only to take a tumble at the end, hurting her hip (other one this time) so sadly had a painful run to finish. Still an amazing performance, and I imagine rather sore today! Next up in the 30-34 AG was Jen, who has had a year of rehabilitation from AFTL surgery, followed by illness, then falling and injuring the other ankle! However, this did not stop her executing the race perfectly, and despite limited run training, stormed it with another sub 40 10k to finish in the silver medal position, 4th overall.  Finally, but by no means least, Becky after a nights recovery from the sprint went for medal number 2 and did not disappoint. Despite cramp hindering her running at the end, she still secured the gold medal making it the double gold! Amazing!  (and I have to say well done to Nick – friend of the goalspecific team,  top Windrush coach, who also took on the double challenge coming 2nd in the sprint and 4th in the Olympic, those 2 need a holiday now! – maybe the Alps! ha ha)

Closer to home, we also had Eric at Outlaw X, Mark taking on the new Bolton 70.3 and Joe racing the Sprint Mallory Cup Triathlon.  Eric seemed to get faster and faster the longer he was out there securing an Age group win, and Mark put in a great swim and bike on that very tough course, though cramp definitely got the better of the speedy legs  on the run. Joe, despite a rocky lead up into the race, impacting the consistency of his training pulled it out of the bag with an overall 2nd in AG. Ian was also racing in the standard Aquabike in the Hever Castle series, against a strong field, finished 5th in his AG and Anna secured an AG win, 9th overall in the Dorset Black Hill 10k 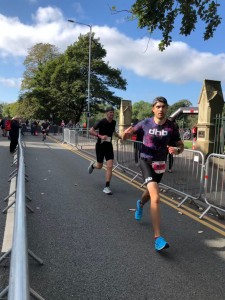 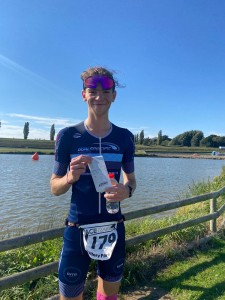 Now that does bring the season to a close for some athletes, but by no means all!  October is going to be another busy month! Next week we have Gav and Ritch racing Barcelona 70.3 and Jon F and Liam taking on the full IM. Eric and Mike will be revisiting  the Thruxton Duathlon, (obviously they were not put off last year racing it in Storm Alex!) Then the weeks that follow include Georgia racing Amsterdam half marathon, followed with 70.3 Sardinia the week after, Jess, Marta, Louise and the Bungay’s heading to Peguera Challenge, Hector to IM Mallorca, Kate to Portugal 70.3 and Becky U and Salam to Turkey 70.3! I am sure there will be a few others thrown in as well for good measure!