Another great weekend of racing from the Goalspecific Team. We had Jon, Becky and Jess racing in the Chilterns Middle (sadly due to a bike crash, Salam was side lined for this one, hopefully though all will be ok for Weymouth!) and Mark in the Olympic (first race in 2 years as well!) Mike lined up for the standard distance in the New Forest, and George with a last minute entry into the Malverns Classic  XC mountain bike event. First race in a while due to a nasty mountain bike crash earlier this year that resulted in shoulder surgery. However, he worked hard at rehab, and rebuilding fitness, so it was a well deserved 1st place overall, a fantastic result considering.

Mike had a fantastic race in the New Forest with a strong swim and bike finished off with a brilliant 10k pb on the run to finish 2nd in his age group, all boding well for his upcoming races including the Outlaw Bowood Half in a couple of weeks.

At Conquer the Chilterns, Becky and Jess were using the event as a pre Weymouth practice event. Jess, never having completed a middle distance event took the opportunity to experience the distance, practice fuelling and pacing, and Becky to practice some specific strategies and process goals and iron out any potential issues pre Weymouth, having not had the chance to race the distance since late 2020.  Mark needed to dust off the cobwebs pre Bolton 70.3 as well and Jon with Barcelona around the corner also wanted to get some race experience under his belt.  First up was Mark in the Olympic distance, sadly tracking him became an issue as the chip came off in the swim, however despite not receiving a chipped finishing time based on the trusted Garmin watch a solid swim / bike and speedy run placed him 5th in his AG, 16th overall, and more importantly some race experience before heading into the longer distance and very hilly new 70.3 event in Bolton. Jess had upped the distance again since London, with a hillier race as well, and despite not being 100% going into the race executed it perfectly, successfully fuelled throughout the bike and secured a 10mile pb as part of the run. Becky really did put together a fantastic race here, executing all of her goals throughout the race and illustrated that the hard work is paying off on the bike, plus a really solid run off, which placed her 3rd Overall. Great result. Jon also raced well, with a solid performance throughout placing 2nd in his AG. 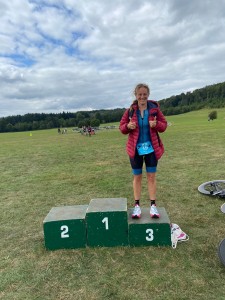 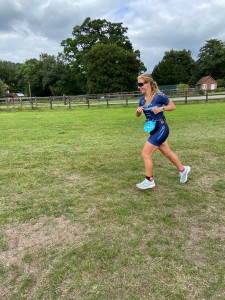 Last week’s action also saw Sarah and Tripurbeck’s Alex racing the national middle distance championships in Aberfeldy in typical scottish weather and Ian racing in the South Coast tri. Sarah swam and biked well before deciding to stop and watch Alex finish as he was leading the race off the bike. A brilliant race that eventually saw Alex finish in 5th overall. Ian executed an excellent race with particularly strong swim and bike splits with more to come in September.

Next up we have Becky racing in the ROC next weekend,  Jen and  Joe, (potentially if well) at Box End. Richard, Jon, Dillon and Mike at Bustinskins and Katie at the Bedford Standard distance, so lots still happening