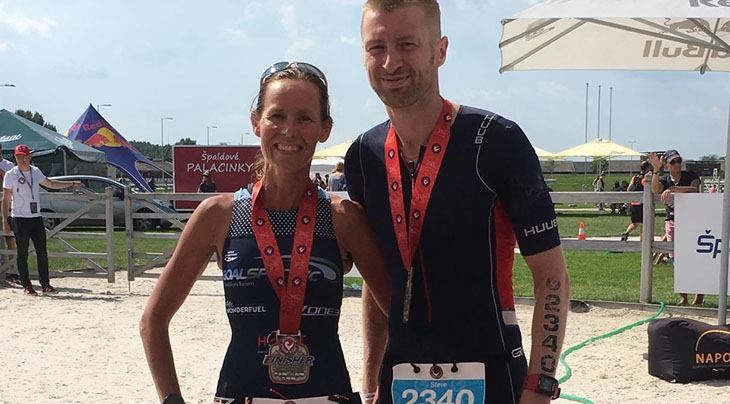 Lots going on last week included an iron distance debut from Mike – which went brilliantly, a major championship medal for Becky in Weert, second place for George at the Salty Sea Dog and an AG win for Derek! More on those soon but first up Steve and Fran were lining up at the Challenge Championships in Samorin Slovakia after securing qualification at Paguera, Mallorca last year. Fran’s little run of bad luck unfortunately continued! 4th out of the water and up to 2nd by 60km into the bike, everything seemed to be going well when she managed to snap the casing off her pedal – not so good and one legged cycling for the rest of the ride meant that her race was done although she did jog home to finish. No such disaster for Steve though – absolutely great race …. and his race report is awesome

As the mid-morning temperature started to creep above the mid-twenties, it was a relief to enter the 14 degree river Danube 60 seconds away from what was at times, an arduous 6 month “training camp” leading to today’s event…

In the days preceding the Challenge Family Championship the familiar prangs of anxiety set in, “would I get a puncture?” “would I have enough energy to hit the speeds I want?” “would I disappoint those loved ones joining me on the trip” etc… This usually results in lack of sleep which for me especially, exacerbates the situation.
This prompted the “I’m knocking it on the head after this one…” text message to Ade at silly o clock in the morning…sorry Ade, but my Mrs was working and I’m not completely sure my 5 year old is ready for me to unload my mental challenges on her when the only challenge she has to face at that time of day is whether to have rice crispies or toast for breakfast!

After taking the bike apart, accompanied by the usual expletives an amateur like myself delivers when attempting to get it in the box, we were dealt another logistical blow when it wouldn’t go into the boot without having to fold the seats down…”is this f***ing worth it?!” was repeatedly coming to mind! Eventually, we got there in the end. We were flying from Bristol, not an airport I frequently fly from, and probably not one I plan on going to again… What an absolute bastard to get to! Anyhow, we’re there, we’re relatively relaxed and we’re finally ready to depart…

The anxiety calmed on arrival in Vienna once the box finally dribbled down the conveyor belt and we arrived at our Airbnb, a nice little place on the North side of Bratislava.

The following morning we made the journey down to Samorin, a little village about 40 odd kilometers South of Bratislava. I met up with Ade, who quickly reassured me everything, including myself was in working order and as prepared as I could be. The stature of the event hit home when you start to see men of all ages with shaven legs, something I’m not accustomed to nor have I participated in before!
Fran and I attended the briefing, to be told by the local race director attempting to be funny and failing at every opportunity (something I think I’ve fallen foul of here!) that there was a high probability the swim would be cut short due to debris, the temperature and the current, something neither of us were too disappointed about. After racking, collecting my flashy new triathlon bag and locating my wife and daughter who managed to enjoy an afternoon at the resorts waterpark we were on our way home for an early night
… Or were we?! It was the Champions League Final, my wife, daughter and Dad’s wife had gone back home and we were in a town full of stag do’s where my old man and I was approached every 15 yards by some shady pr person for the local strip clubs! What could go wrong?!!! Haha

After swerving the temptation to have a little glass of wine, I woke up feeling brand new after consuming half a sleeping tablet. Today was the day I’d worked diligently towards for the previous 6 months. Trying to grind out an extra 10 watts whilst watching another average show on Netflix, telling yourself that your arse is supposed to feel like this when you’re two and a half hours into a leisurely cycle, enduring swim class after swim class trying to catch George and Annie (I gave up after a month!), and running miles after miles trying to convince yourself that the odd cheeky shortcut in a session wouldn’t hurt anyone, had culminated with me mixing it up with the best competitors in my age group from all over the world.
Standing there over my bike with my name in a laminated sign (it’s the small things!), next to a GB flag gave me the sense of pride that I’d really accomplished something special in the 18 months since I started the sport…for me, it was a surreal moment.

If the magnitude of the event hadn’t already hit home, witnessing the sports biggest stars conduct their pre-race rituals, whilst camera crews filmed in and around the transition area certainly did the enough to give you perspective on the size of the event. They never did ask me for an interview… Can’t for the life of me understand why!
The next hour watching competitors swimming into trees lodged near the bank, witnessing weaker swimmers going backwards in the ridiculously strong current and deliberating tactics with my triathlon novice old man wasn’t as agonising as standing around in your wet suit for the ten minutes prior to start time dripping with sweat and panicking more about the desperate need to get into the water than the German fella next to me with the honking breath… However, the time was upon us… LET’S DO THIS BABY!

The start, which was the approved by race coordinators at the full distance was quick and extremely messy. I heeded the advice from my novice Dad and Ade to swim nearer to the bank where the flow of the water wasn’t as strong. Yet, there was obviously more that had taken the same view and swum a similar line. I don’t consider myself a violent man but I was repeatedly getting pulled back by one swimmer in particular. An extended kick didn’t work so I stopped and turned to push him off when he decided to stop; must’ve seen how buff and dangerous I looked when slipping into my wetsuit!!!