Well October maybe fast approaching, but the racing is still happening throughout the UK and Europe. September started with Bustinskin’s Standard distance, where Marta stepped up and tried an Olympic distance for the first time! It would seem the longer the better!! Maybe a 70.3 next year

Oliver also lined up for a bit of practice pre Slovenia 70.3 and finished 10th overall in his AG, a great performance, and looking good for Slovenia!  The following weekend was the Challenging Events  sprint standard and Aquathlon, races where George, Olivia, Sarah,  Mike, Steve and Annie were testing their legs before their 70.3 races. George blitzed the sprint, winning outright, Olivia, had a puncture, but still managed to hitch a lift back and get onto that run, and Sarah put a solid race in from start to finish, despite getting a stitch on the run.  Emma and Rich were there as well, and Emma finished 1st in the ladies (must be all that riding up the Alps!) and Rich 4th overall. Steve finished 4th overall in a stacked field, and Mike beat his 10k pb in the run, despite it being a triathlon!  Annie won her age group, finishing 5th female in the Aquathlon, great practice for Brighton – which was the following week where she would be racing with Sarah, Samuel and Tania.  We still do not quite know what is happening with the Sprint results for Brighton qualifiers, due to a crash stopping the race, but all athletes raced well, although Sarah and Annie definitely suffered on the run from a dodgy Harvester meal the night before!

Last weekend, we had Ade, me, Oliver, George, Paul and Liam flying out to Slovenia for the 2nd edition of their 70.3. Meanwhile, Marianne, Sarah, Olivia, Mark, Steve, Eric and Mike were staying a bit more local to experience the wind and the rain, of Weymouth 70.3.  A great show at both events, matched with top results, with all athletes achieving and going beyond their target goals. 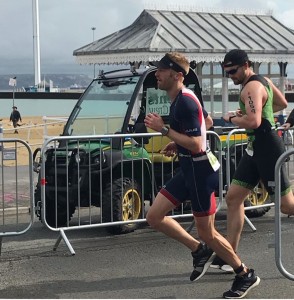 In Weymouth, Sarah, who was racing for the 3rd weekend in the row, like everyone I believe had a pb in the swim (well ok it was cut short!) a pb on the bike course and was on for a pb on the run course, when the legs decided that they didn’t want to play anymore. Understandably, however, still a great time and goals achieved! Marianne, put a solid race in from start to finish, crossing the line a couple of mins ahead of Sarah as they played cat and mouse throughout the course (same at the Immortal I believe!). So much more to come from both of them. Olivia was racing 70.3 for the first time, and as the photos clearly illustrate, was having a fantastic time, and a great race as well. Now time to focus on flying planes for a bit, but hopefully back to the racing relatively soon!  Massive performance from Steve who came 9th out of 287 in the 35-39 age group in a brilliant 4hr29min finish including a 1.25 run split, and Mike, despite a crash on the bike, posted a massive pb on the course  (and that’s with taking the shortened swim into consideration) Eric despite being a little frustrated that the swim was cut short AGAIN, had a great race, improving on last year, and still more in the tank!  Jane, completed in the relay race with her dad, which must have been amazing, and finished 7th out of 38, a great result and memorable day for all of them.

Meanwhile, out in Slovenia, we were dodging the jellyfish in the warm, salty and a rather long swim of the Ionian Sea, whilst admiring the water life swimming underneath us. Then onto the ride, which was either up or down to be honest, through some beautiful villages and countryside, on smooth tarmacked roads, really can’t complain!  George was first back to tackle the one lap run course, and finished in around 4.45, and I believe the first GB athlete home in the whole race! Next in was Paul, with a pb on the course, a great run and we thought finishing on the podium. However, a super fast chap came in a bit later with a 1.28 run split, taking that 3rd podium slot. Disappointing not to get on the 3rd step, however, still an absolutely amazing performance.  Not far behind was Ade, and as usual whizzes past me in the last km. All that mountain work paying off over the summer, and a consistent, solid performance from start to finish. Oliver was next up in the chaps, and I honestly do not know how he managed to perform at all, being really quite ill all week, but he managed to pull something out of the bag for the day finishing in 5.35. (though needed 14 hours solid sleep straight afterwards!) Liam was tackling his first 70.3, clearly decided to pick a hilly one, and loved every minute. The key here was to get the nutrition right, pace the bike, so the back was good, and the legs ok for the run. Nailed this, and despite the blisters, ran a solid 21k – longest run to date! Really looking forward to building and progressing on this for next year!

As for me, well, as many of you know, we did not even know we were going to make it out there until Wednesday due to a rocky couple of weeks. A lack of sleep, combined with a roller coaster of emotions, topped with  a timely period, with horrendous cramps had me contemplating being a spectator on the Saturday.  However, I hate missing out, especially in such a beautiful place, so just took the day as it came. My key objective was to reign in a bit on the bike, to see if my legs would work on the run. I was pretty nervous in the last 5k of the bike…. will they, wont they, I just never know, so very gingerly  started the run. Paul passed me at around the 1k marker, a quick chat and off he disappeared into the distance looking really solid!  As usual hip was not too happy, but not cramping, so it was all about small targets. Make the 1k marker, then the 2, then the 3 and just keep going. Forget about everyone else, don’t even look at the watch, just try to keep the legs moving and for the first time this year, I actually achieved this.  Ok it was not that speedy, and I have chaffing on my inside right knee due to the left banging against it for the last 8k, BUT I could still keep going and was very pleased to step back onto that podium with a 2nd place finish and a slot to NZ.  One big step forward, and hopefully lots more little ones throughout this winter!

So, whats next? Well, we have some sprint racing in Devon with James, the Osprey Sprint with Eric, Bournemouth half and marathon for Marta, Suzanne and Anna,  then we head off to our annual trip to Mallorca with Becky, Liam, Emma and Rich for Challenge Peguera. AND, the crazy Trans – Pyrenees bike challenge, George is due to set off on next week!  A great way to end the racing season. (well nearly end the racing season, just the Redball challenge the week after…more on that at a later date!)