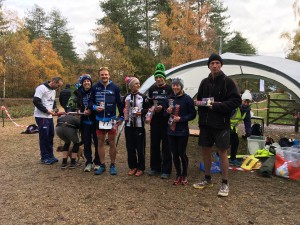 Well it may have been a small field at the Tripurbeck Duathlon, but there was plenty of fast racing from pro athletes to top Age group athletes, to those testing out their bikes and running legs for the first time.

Amongst the ladies was a previous winner, pro athlete Lou Fox, daughter of our coaches Derek and Sharon, looking to test out her new bike set up from her recent sponsors TriUK. Goalspecific Helen was also lining up to test out her ankle after a fair few months of rehab from a nasty sprain. We knew the bike legs were there after the Redbull weekend! Also competing was Goalspecific Anna, who thought she would take on the challenge of an off road duathlon, having never ridden a mountain bike before, and only purchasing one last week. Bex came as a last minute decision for a bit of speed work, and had to ride my bike (or is it Max’s?), which of course she had never ridden before either! Tania never misses the opportunity to race this event, lining up with Samuel, who as a junior, recently qualified for the ITU Sprint Champs in Canada next year, along with Annie (who we roped into Marshalling for us this year, rather than racing). George, now recovered from the crazy trans Pyrenees venture, was up for seeing how the run legs were going to work, and put some speed down on the off road course but had some tough competition from x pro Richard Stannard and Henry Eaton looking to qualify for his Age Group in the Cross Duathlon Championships next year.

First back from the run was Henry, with George 60-90 secs behind, in hot pursuit! Lou was the first female back, closely followed by Catherine into transition and who was first out onto the bike. Helen was 3rd female back into transition with a really solid run….great news!!

Onto the bike lapped courses and George was the first athlete round, which lead to some concerns as to what had happened to Henry. Unfortunately he took a slight diversion onto the run course, and dropped down to 4th place. George was blitzing it, though some strong riders were in hot pursuit.  In the ladies race, Lou took the lead, but Helen was closing the gap throughout the 4 laps, and both ended up in transition very close together.   Onto the final 2 miles of the run,  Lou pulled away to take the lead, coming home as first female, with Helen 2nd, and Catherine 3rd. Also well done to Lisa Thomas for taking the overall female vets prize. In the men’s field, George secured the win, with Jon Heasman second and Giles Heamon 3rd. Well done to TriPurbeck’s Dave Brown for putting in a fantastic race to win the male vets prize.

GS athletes Anna,Bex and Dave Cake all had good races and Samuel despite feeling some legs fatigue in the first run recovered to finish in an excellent 1hr33min – pretty quick as he was the youngest athlete in the field by far.

Finally but by no means least, despite cancelling the junior event this year, we still had a handful of our club juniors who wanted to challenge themselves on a longer, tougher course. They certainly did that, and were lapping the adult course in very competitive times, after a 1.5km run. Well done to Zac who took the win, after Willow came in to transition just ahead on the bike, and massive kudos to Will, who had not ever competed in a Duathlon before, still took on the challenge of a difficult course, on a much smaller bike!

Keep an eye out for the race again next year, and hopefully, juniors, get your entries in earlier, so we can get you racing again, we missed you all!!